by Fan Art and Cosplay

The perfect gift for any massive Star Wars fan. Great for Cosplay or just for displaying!

The K-16 Bryar Pistol was a model of blaster pistol used by the soldiers of the Rebel Alliance during the Galactic Civil War against the Galactic Empire. Deceptive by design, the K-16 appeared to be a regular pistol; however, it featured a modified power unit capable of releasing the entire heat source in one powerful blast as secondary fire.

The K-16 Bryar Pistol was a model of blaster pistol that was capable of firing red-colored blaster bolts, though not as powerful as other blaster pistols. Although it appeared to be a fairly ordinary pistol outside, the K-16 actually possessed a modified power unit. Thanks to the power unit, the weapon was capable of discharging the entire heat source in one lethal power blast as secondary fire.

The K-16 was a black-colored pistol that had a vertical grip beneath the backside of the barrel, allowing the wielder to hold the weapon with one hand. The middle section of the barrel, which contained cooling vents on either side of the weapon's frame, was in the shape of a thick, elliptical prism. Below the Bryar Pistol's muzzle at the front, there was a gray, smaller, circular protrusion. The K-16 also possessed a rectangular, protruding part on the left side of the body, over the trigger. Additionally, the pistol featured a trigger guard.

Made out of high-quality plastic and acrylic paint.

* Optional leather holster (can be used on both sides)

An excellent accessory to add to your Star Wars collection.

Item will be shipped from Russian Federation

Fan Art and Cosplay accepts the following forms of payment: 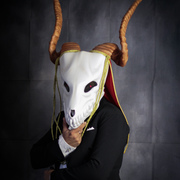 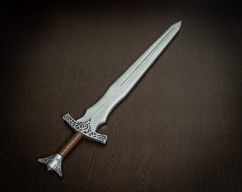 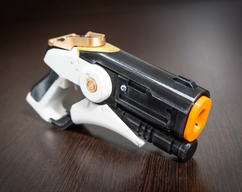 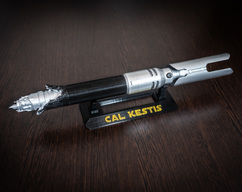 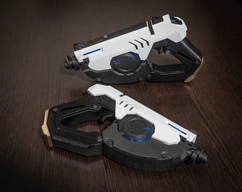