British Fighter, 1917-1918
Designed by the Royal Aircraft Factory, the SE5 and its
improved version, the SE5a, were perhaps the best British
production fighters of the war. With a HispanoSuiza
V8 engine it was not quite as fidgety, fussy and maneuverable
as the rotary powered Sopwith Camel but it was faster, and
generally less dangerous to its own pilots, and was in fact
the first SE5 he flew. It was taken on charge by the Royal Flying Corps
on June 15, 1917, and before assignment to the front was partially brought
up to SE5a standards. From late July until mid August he claimed 10 victories
in this aircraft. At this time, Bishop was in charge of "C" Flight of No. 60
Squadron and the Flight marking was a blue nose and fin. "A" Flight had red
and "B" Flight used yellow.
Here he's seen stalking and counterstalking a German Albatros in shifting light.
****SHIPPING COST TO BE DETERMINED****
e-mail your interest & location to Robert at KarrArt@aol.com for an estimate 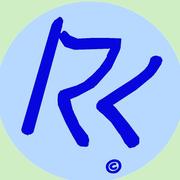 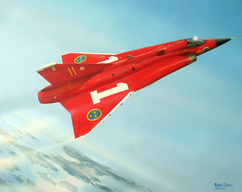 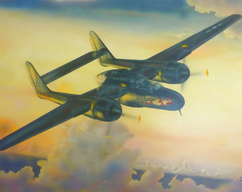 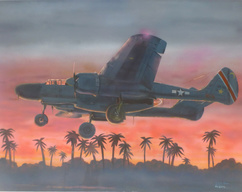 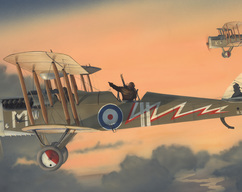