by Quilts on the Wild Side

Are we heroes or clowns, civilized or barbaric? And who is pulling the strings?

We imagine that we alone decide the direction of our lives, yet it often seems that we have little real influence over the greater events of the world, where chaos and unpredictability so often prevail.

This quilt started with the blue medallion, created four-square in a series of safe and predictable borders. By the fifth concentric blue border, I was ready to break loose, and began choosing wilder and more “unsuitable” fabrics.

This led to increasing chaos, imbalance, and visual impact. It also led me to ponder, "Who's in charge here, anyway?"

Materials used: cotton fabrics including hand-dyed and vintage  pieced and appliquéd by hand and machine  quilted by hand with dmc perl cotton

Item will be shipped from Canada

Quilts on the Wild Side accepts the following forms of payment: 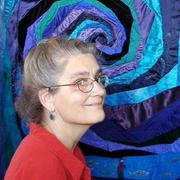 Quilts on the Wild Side