Bhairava (Sanskrit: à¤­à¥à¤°à¤µ, lit. frightful) is an Indian deity worshiped by Hindus, Buddhists and Jains. In Shaivism, he is a fierce manifestation of Shiva associated with annihilation.[1][2][3][4] In Vajrayana Buddhism, he is considered a fierce emanation of MaÃ±juÅrÄ« and also called Heruka, Vajrabhairava and Yamantaka. [5][6]

The historical origins of Bhairava are obscure, according to Ronald M Davidson, he was probably a "local ferocious divinity" associated by tribal peoples with cremation grounds (smasana), ghouls and ghosts (vetala, pisaca).[7] He is worshiped throughout India, Sri Lanka and Nepal as well as in Tibetan Buddhism.[8][9]

Bhairava originates from the word bhÄ«ru, which means "fearful". Bhairava means "terribly fearful form". It is also known as one who destroys fear or one who is beyond fear. The right interpretation is that he protects his devotees from dreadful enemies, greed, lust and anger. Bhairava protects his devotees from these enemies. These enemies are dangerous as they never allow us to seek God within. There is also another interpretation. Bha means creation, ra means sustenance and va means destruction. Therefore, Bhairava is the one who creates, sustains and dissolves the three stages of life. Therefore, he becomes the ultimate or the supreme.[10]

The origin of Bhairava can be traced to a conversation between Brahma and Vishnu which is recounted in the Shiva Mahapuranam. In it, Vishnu inquired of Brahma, "Who is the supreme creator of the Universe?" Arrogantly, Brahma told Vishnu to worship him as Supreme Creator. One day, Brahma thought "I have five heads. Shiva also has five heads. I can do everything that Shiva does and therefore I am Shiva." Brahma became a little egotistical as a result of this. Additionally, he began to forge the work of Shiva and also started interfering in what Shiva was supposed to be doing. Consequently, Mahadeva (Shiva) threw a small nail from his finger which assumed the form of Kala Bhairava and casually went to cut off one of Brahma's heads. The skull (Kapala) of Brahma is held in the hands of Kala Bhairava, Brahmaâs ego was destroyed and he became enlightened. From then on, he became useful to himself and to the world, and deeply grateful to Shiva. In the form of the Kala Bhairava, Shiva is said to be guarding each of these Shaktipeeths. Each Shaktipeeth temple is accompanied by a temple dedicated to Bhairava.[11][12]

It will make a fantastic gift for someone special or for a collector of Asian antiques.Keep it with you for Strong Life Protection or keep it in your house .This is a fabulous collector's item indeed!

WE ACCEPT PAYPAL .. ONLY!

We will ship WorldWide.Shipping and handling cost is FREE Worldwide.
We ship within 24 hr. after payment is received.
Please make payment within 7 days after auction ended.
Please contact us before leaving negative feedback or low Detail Seller Ratings ( DSR), giving us a chance to resolve your problem.
Return Accepted within 30 days with final price money back(buyer pay for return S&H cost)
I will leave Positive Feedback right after the payment is completed. 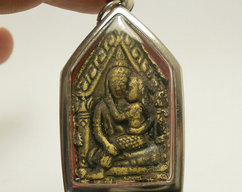 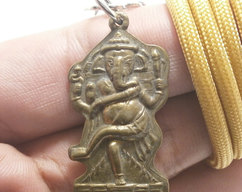 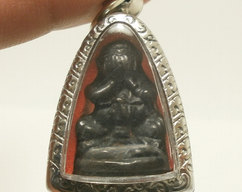 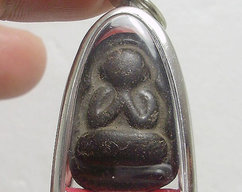