The Lord of Success

The son of Shiva and Parvati, Ganesha has an elephantine countenance with a curved trunk and big ears, and a huge pot-bellied body of a human being. He is the Lord of success and destroyer of evils and obstacles. He is also worshipped as the god of education, knowledge, wisdom and wealth. In fact, Ganesha is one of the five prime Hindu deities (Brahma, Vishnu, Shiva and Durga being the other four) whose idolatry is glorified as the panchayatana puja.

Significance of the Ganesha Form
Ganesha's head symbolizes the Atman or the soul, which is the ultimate supreme reality of human existence, and his human body signifies Maya or the earthly existence of human beings. The elephant head denotes wisdom and its trunk represents Om, the sound symbol of cosmic reality. In his upper right hand Ganesha holds a goad, which helps him propel mankind forward on the eternal path and remove obstacles from the way. The noose in Ganesha's left hand is a gentle implement to capture all difficulties.

The broken tusk that Ganesha holds like a pen in his lower right hand is a symbol of sacrifice, which he broke for writing the Mahabharata. The rosary in his other hand suggests that the pursuit of knowledge should be continuous. The laddoo (sweet) he holds in his trunk indicates that one must discover the sweetness of the Atman. His fan-like ears convey that he is all ears to our petition. The snake that runs round his waist represents energy in all forms. And he is humble enough to ride the lowest of creatures, a mouse.

Brahma is the Hindu god (deva) of creation and one of the Trimurti, the others being Vishnu and Shiva. He is not to be confused with the Supreme Cosmic Spirit in Hindu Vedanta philosophy known as Brahman. Brahma's consort is Saraswati, the goddess of learning. Brahma is often identified with Prajapati, a Vedic deity.

The Trimurti (English: Ã¢â¬Ëthree formsÃ¢â¬â ¢; Sanskrit: trimurti) is a concept in Hinduism "in which the cosmic functions of creation, maintenance, and destruction are personified by the forms of Brahma the creator, Vi??u the maintainer or preserver, and Siva the destroyer or transformer."These three deities have been called "the Hindu triad" or the "Great Trinity". They are often looked at as the creator, preserver and destroyer respectively. Freda Matchett characterizes the Trimurti system as one of "several frameworks into which various divine figures can be fitted at different levels

Hindu Priest of Wat Kaek Temple,Silom , Bangkok created and blessed this amulet for using as

It will make a fantastic gift for someone special or for a collector of Asian antiques.Keep it with you for Cross over obstacles & Great Success Power or keep it in your house .This is a fabulous collector's item indeed!

We will ship WorldWide.Shipping and handling cost is FREE Worldwide.
We ship within 24 hr. after payment is received.
Please make payment within 7 days after auction ended.
Please contact us before leaving negative feedback or low Detail Seller Ratings ( DSR), giving us a chance to resolve your problem.
Return Accepted within 30 days with final price money back(buyer pay for return S&H cost)
I will leave Positive Feedback right after the payment is completed.
I sell only genuine antique Thai Amulets ,Pendants.

I have big collection of
Lord Ganesha Amulets
in my store
please come in and check them out!!! 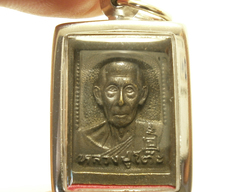 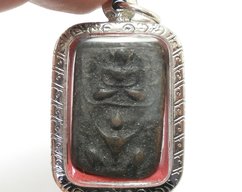 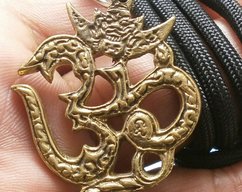 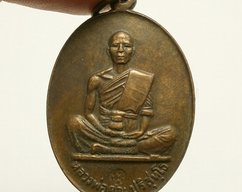