Shiva (/ˈʃivə/; Sanskrit: Śiva, meaning "The Auspicious One"), also known as Mahadeva ("Great God"), is a popular Hindu deity. Shiva is regarded as one of the primary forms of God. He is the Supreme God within Shaivism, one of the three most influential denominations in contemporary Hinduism.[2][3] He is one of the five primary forms of God in the Smarta tradition,[2] and "the Destroyer" or "the Transformer"[4] among the Trimurti, the Hindu Trinity of the primary aspects of the divine.

At the highest level, Shiva is regarded limitless, transcendent, unchanging and formless.[5][6][7][8][9] Shiva also has many benevolent and fearsome forms.[10] In benevolent aspects, he is depicted as an omniscient Yogi who lives an ascetic life on Mount Kailash,[4] as well as a householder with wife Parvati and his two children, Ganesha and Kartikeya and in fierce aspects, he is often depicted slaying demons. Shiva is also regarded as the patron god of yoga and arts.[11][12][13]

The main iconographical attributes of Shiva are the third eye on his forehead, the snake Vasuki around his neck, the crescent moonadorning, the holy river Ganga flowing from his matted hair, the trishula as his weapon and the damaru as his instrument. Shiva is usually worshiped in the aniconic form of Lingam.[14][15][16]

The son of Shiva and Parvati, Ganesha has an elephantine countenance with a curved trunk and big ears, and a huge pot-bellied body of a human being. He is the Lord of success and destroyer of evils and obstacles. He is also worshipped as the god of education, knowledge, wisdom and wealth. In fact, Ganesha is one of the five prime Hindu deities (Brahma, Vishnu, Shiva and Durga being the other four) whose idolatry is glorified as the panchayatana puja.

Hindu Priest of Wat Kaek , Silom,Bangkok, Thailand created and blessed this amulet for using as

It will make a fantastic gift for someone special or for a collector of Asian antiques.Keep it with you for Strong Life Protection or keep it in your house .This is a fabulous collector's item indeed!

We will ship WorldWide.Shipping and handling cost is FREE Worldwide.
We ship within 24 hr. after payment is received.
Please make payment within 7 days after auction ended.
Please contact us before leaving negative feedback or low Detail Seller Ratings ( DSR), giving us a chance to resolve your problem.
Return Accepted within 30 days with final price money back(buyer pay for return S&H cost)
I will leave Positive Feedback right after the payment is completed. 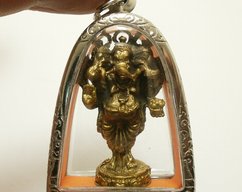 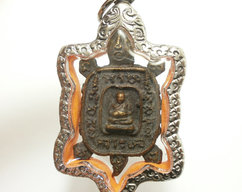 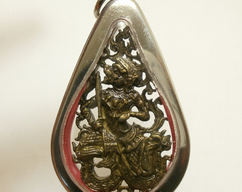 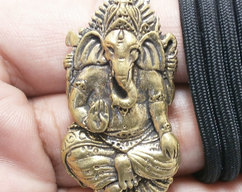