Vishnu (Sanskrit pronunciation: [vÉªÊÉ³u]; Sanskrit: à¤µà¤¿à¤·à¥à¤£à¥, IAST: Viá¹£á¹u) is one of the principal deities of Hinduism, and the Supreme Being in its Vaishnavism tradition.[5][6] Vishnu is the "preserver" in the Hindu trinity (Trimurti) that includes Brahma and Shiva.[7]

In Vaishnavism, Vishnu is identical to the formless metaphysical concept called Brahman, the supreme, the Svayam Bhagavan, who takes various avatars as "the preserver, protector" whenever the world is threatened with evil, chaos, and destructive forces.[8] His avatars most notably include Rama in the Ramayana and Krishna in the Mahabharata. He is also known as Narayana, Jagannath, Vasudeva, Vithoba, and Hari. He is one of the five equivalent deities worshipped in Panchayatana puja of the Smarta Tradition of Hinduism.[6]

In Hindu iconography, Vishnu is usually depicted as having a dark, or pale blue complexion and having four arms. He holds a padma(lotus flower) in his lower left hand, Kaumodaki gada (mace) in his lower right hand, Panchajanya shankha (conch) in his upper left hand and the Sudarshana Chakra (discus) in his upper right hand. A traditional depiction is Vishnu reclining on the coils of the serpent Shesha, accompanied by his consort Lakshmi, as he "dreams the universe into reality".[9]

Lakshmi or Mahalakshmi is the Hindu goddess of wealth and prosperity.
Representations of Lakshmi (or Shri) are found also in Jain and Buddhist monuments, with the earliest archeological representation found in Buddhist monuments.
Mahalakshmi is the presiding Goddess of the Middle episode of Devi Mahatmya. Here she is depicted as Devi in her universal form as Shakti. The manifestation of the Devi to kill Mahishasura is formed by the effulgences of all the gods. The Goddess is described as eighteen armed bearing string of beads, battle axe, maze, arrow, thunderbolt, lotus, bow, water-pot, cudgel, lance, sword, shield, conch, bell, wine-cup, trident, noose and the discus sudarsana. She has a complexion of coral and is seated on a lotus. [3] She is known as Ashta Dasa Bhuja Mahalakshmi.

Magician Monk in Wat Kaek Temple ,Silom, Bangkok created and blessed this amulet for using as

Blessed for success in all wishes ,
Wealth & Prosperity ,Protection Power & Cross over Obstacles

It will make a fantastic gift for someone special or for a collector of Asian antiques.Keep it with you for Cross over obstacles & Success in all wihes Power or keep it in your house .This is a fabulous collector's item indeed!

We will ship WorldWide.Shipping and handling cost is FREE Worldwide.
We ship within 24 hr. after payment is received.
Please make payment within 7 days after auction ended.
Please contact us before leaving negative feedback or low Detail Seller Ratings ( DSR), giving us a chance to resolve your problem.
Return Accepted within 30 days with final price money back(buyer pay for return S&H cost)
I will leave Positive Feedback right after the payment is completed.
I sell only genuine antique Thai Amulets ,Pendants.

I have big collection of
Lord Ganesh Amulets
in my store
please come in and check them out!!! 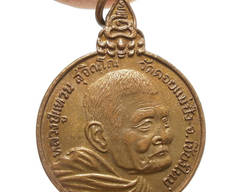 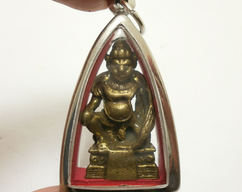 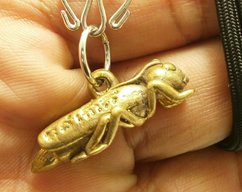 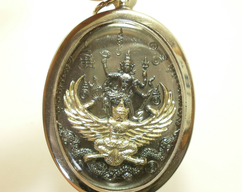