The snake goddess's Minoan name may be related with A-sa-sa-ra, a possible interpretation of inscriptions found in Linear A texts.[6] Although Linear A is not yet deciphered, Palmer relates tentatively the inscription a-sa-sa-ra-me which seems to have accompanied goddesses, with the Hittite išhaššara, which means "mistress".[4]:256, 263

A woman (probably a goddess) holding snakes in both hands, from Gotland, Sweden
The serpent is often symbolically associated with the renewal of life because it sheds its skin periodically. A similar belief existed in the ancient Mesopotamians and Semites, and appears also in Hindu mythology.[7] The Pelasgian myth of creation refers to snakes as the reborn dead.[citation needed] However, Martin P. Nilsson noticed that in the Minoan religion the snake was the protector of the house,[2] as it later appears also in Greek religion.[8] Within the Greek Dionysiac cult it signified wisdom and was the symbol of fertility.[7]

Barry Powell suggested that the "snake goddess" reduced in legend into a folklore heroine was Ariadne (whose name might mean "utterly pure" or "the very holy one"), who is often depicted surrounded by Maenads and satyrs.[9] Some scholars relate the snake goddess with the Phoenician Astarte (virgin daughter). She was the goddess of fertility and sexuality and her worship was connected with an orgiastic cult. Her temples were decorated with serpentine motifs. In a related Greek myth Europa, who is sometimes identified with Astarte in ancient sources, was a Phoenician princess whom Zeus abducted and carried to Crete.[10][11] Evans tentatively linked the snake goddess with the Egyptian snake goddess Wadjet but did not pursue this connection. Statuettes similar to the "snake goddess" type identified as "priest of Wadjet" and "magician" were found in Egypt

Artist created and blessed this amulet in 1970s for using as

It will make a fantastic gift for someone special or for a collector of antiques.Keep it with you for Evil Protection or keep it in your house .This is a fabulous collector's item indeed! 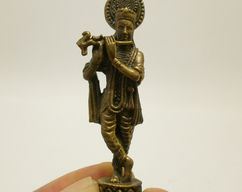 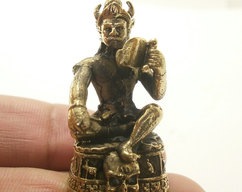 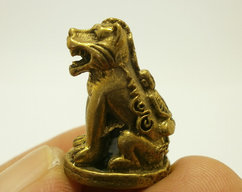 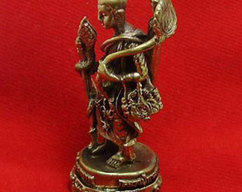